Dera Almosters,
I'm here writing and this means I'm not there driving .. wtfsmilie in fact I had to abort Paradise City V as engine of my Pajero was not pushing as usual and as needed for such a drive TT TT

Shame as I really wanted to make this drive and not even the full week spent abroad for business, the late landing and the short sleep managed to reduce the motivation

Given the size of the dunes I realized quite soon something wrong was going on with my car. It was ok when I could keep the speed high and in the technical points but the car was not climbing on the big dunes. Something must have happened as last week my engine was kicking much stronger. I'll visit the garage tomorrow

Today I felt I have put into practice one of the most important lessons learned from Almost: safety first! .. even when this means you've to put your excitement under control. I could not keep the lines of the other cars in the convoy and I realized that quitting was the right thing to do, simple.

Thanks everybody for the support. I hope I've not impacted for too long your great rhythm have a nice day

Desert sites are getting crowded in the last 3 years, in the past it was only us in this area and it is very rare to see another group.

Yesterday morning we saw 3 convoys from different groups and our club had 3 convoys = 6. I was thinking " Dear God I hope that the leading cars won't meet ".

I was sweeping for [mention]Daggerfall[/mention] in his convoy and made mission to keep an eye on our surrounding and make sure that our leader is hovering around freely.

I am glade that I was NOT leading that day because the GPS was going crazy and NOT finding a single satellite!!!! Where did they go ??? Or is it my device only ???? Well either our leader really good and he knows what he is doing or his GPS is working fine arr.

At the end the drive I got distracted with a phone call so I lost the convoy at the fence so I did the old say " If you are LOST , follow the locals " and that exactly what I did yaeh am not durnk . I called on the radio to report that I am safe and sound and reach the main road !!! thumbsup

We had great time with all of you and looking forward to see you in the camping season.

I remember the days when I reached to a certain level of experience, Sweihan drives were my favorites in the club. In those days we were also driving at the chain on the other side of the road and I have great memories in this area. So now its our time to do our best to provide the same joy our club gave us in those days to our members which is the fun for us now and the challenge at the same time. And I hope we managed to do it you're kidding, right

Coming back to our convoy...Thanks to all our members, the flow and the pace was good except some couple of second tries which is part of the game and expected, otherwise it means you are not learning and improving and I need to improve my game as a leader you're kidding, right XD

Sorry for [mention]Loca[/mention]. He had an issue with his car and had to leave early. It would be great to read the story of the next part of our trip with his amazing writing skills . But as we always say "There is always next time" thumbsup

Special thanks to [mention]alshamsi_m[/mention] for his great support and guidance for our convoy as always and all our members supported and joined us this Friday! and they all did great!

At the end of the trip we grouped at the inflation point and I saw smiling faces of members from the other convoy led by [mention]Solmaz[/mention] and it was almost 11:30 and the weather was still feeling good. So the winter is here and get ready for new adventures at further east arr.

See you on next adventure.

Daggerfall wrote: ↑Sat Sep 28, 2019 12:09 pm Sorry for @Loca. He had an issue with his car and had to leave early. It would be great to read the story of the next part of our trip with his amazing writing skills . But as we always say "There is always next time" thumbsup

Thanks to Marshals, an extra convoy "the lucky ones" was opened to cater for the demanding intermediates.

[mention]Daggerfall[/mention] assigned the drivers to 3 convoys, and I was with [mention]Solmaz[/mention] while [mention]Mahmoodyasin[/mention] as a 2nd lead and [mention]Agalon[/mention] floating.

Maybe this is my 7th drive in Sweihan, however [mention]Solmaz[/mention] made it look like its my first! She challenged the convoy with some tricky climbs and side cresting combos which resulted in many second tries and about three stucks (I had my share of one [emoji28]) the car in front slowed down so I lost the needed momentum while driving on the crest, so I ended up with the most stylish stuck. [emoji108]

The drive was enjoyable to the extent that time passed so quickly,, well the season is just starting, more drives are coming, drives duration is stretching,, what else we can wish for?[emoji7][emoji3059] 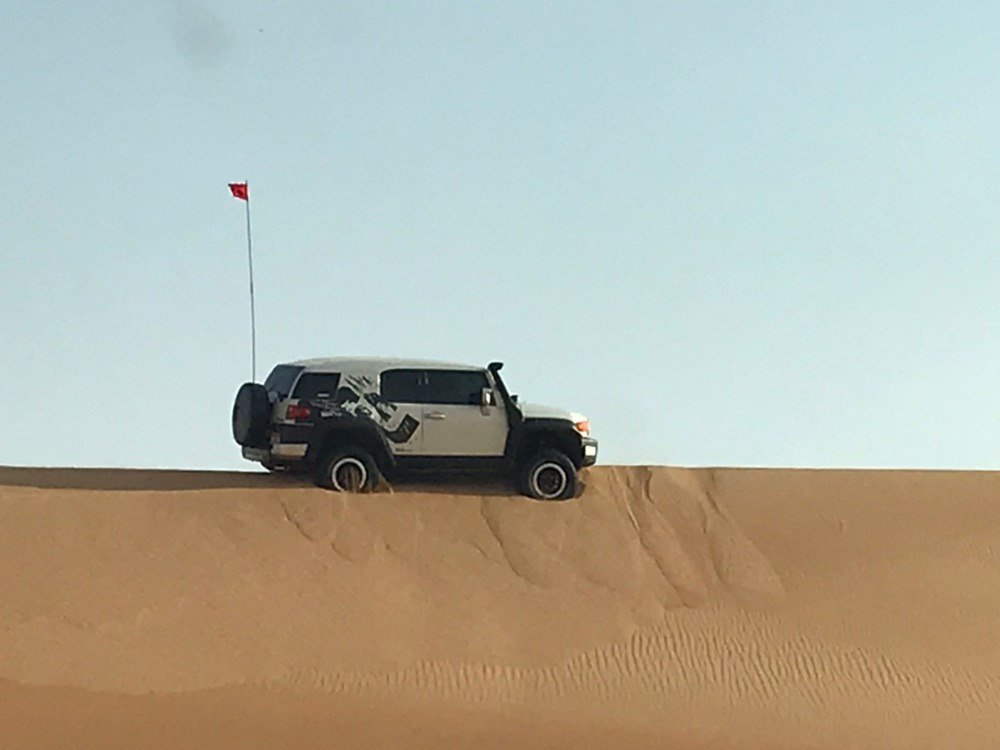 This drive [mention]Daggerfall[/mention] was in the mood... grin
I was assigned sweeper and while I was still counting cars, I heard @Daggerfall via radio: Wake up guys, where is everyone? He already crossed a couple of dunes with no one behind him scared

So there was no warm up, we went all in from the beginning. Our pace was quite fast, even as the last car I had to manage to keep up with the convoy, and the last part of the convoy lost the track a few times after some second tries.
[mention]alshamsi_m[/mention] was floating around, showing is time travel skills being everywhere simultaneously and helping to reconnect the convoy.
Beside some second tries we faced no issues until I managed to get a pop out in nearly flat area angry. Somehow I was distracted for a moment a hit a little edge with the exact wrong angle... At least I could refresh my knowledge of pop out fixing and with all the helping hands it was fixed fast and easy. Thanks everyone.
At the old lady dune we meet [mention]Rashidjass[/mention] and the advanced convoy who seemed to have a great drive too.
We had a break there before @Daggerfall went up the old lady where he found an amazing climb-bowl-ditch combination cool
It took some time until everyone reached the top, but no one got stuck or had a pop out. thumbsup
We ended at 11am on a gatch road where we met the other two convoys.

I enjoyed this drive so much, the area is fantastic and I had great fun. I hope we will drive in the remote areas every weekend in the season, the dunes are amazing, really paradise city.

Thanks everyone for this fantastic Friday morning and see you all soon in the sand
BR, Johanna

If it excites you and scares you at the same time, it probably means you should do it.
Top

The day started with a nice surprise for the advanced drives. [mention]Daggerfall[/mention] let them have their fun with [mention]Rashidjass[/mention] in Sweihan.
Also, for me it became a historical milestone as first time i was driving in [mention]Solmaz[/mention]’s convoy!!!
There were other clubs in the area but our marshals managed to avoid them and let us have our own fun without interference. The flow and pace was great. With her smooth yet challenging style, [mention]Solmaz[/mention] gave our intermediates the excitement they need along with the usual challenges. Great job!!!

We finished on time and proceeded for the Mandi feast; the custom of Sweihan visits.

Thanks to all the team from organization to support for this beautiful morning.

First of all a mighty thanks to [mention]Daggerfall[/mention] for organizing the drive!

Daggerfall took the attendance and divided the members into 3 convoys.
Surprisingly the advance members had their own convoy which was led by [mention]Rashidjass[/mention]

Inter convoys were led by Daggerfall & Solmaz. I was with Daggerfall
Nabil was 2nd lead, Johanna was sweeping and Bu Salem was floating around.

It was one of those drives where you really need to apply every single bit of your training & skills the club has taught you.

We followed our leader to execute every single side crest (regardless of the crest being sharp or flat), high climb, soft arches, a combination of climb+arch+ sharp side crest.

There was one such combination which was highly soft at the top, everyone of us couldn’t execute the side crest in one go. Daggerfall even radioed that if we cant do it, just leave it. Safety First!

Some did it in 2 tries, some in 3 and some couldn't I was able to do it in the 4th try. The feeling after safely executing such side crest was great!

Also there was one instance where the car in front did a 2nd try and the following cars lost the track (as mentioned by johanna) we did the same circuit for almost 3 times to find the correct track until Bu Salem appeared from somewhere and guided us on the radio to the correct track.
Thereafter we continued to flatten the crests until we reached the back side of the old lady. Had a quick get together with our advance convoy.

Then one by one we headed to climb back side of the old lady dune. The drive ended at around 11 am with all smiles


This is one of those drives I would remember for a very long time!

Thanks again to the organizer [mention]Daggerfall[/mention] for giving us a wonderful time!

On the drive day, I woke up not feeling easy about the day... Surprisingly, advance drivers were gifted by a private convoy lead by [mention]Rashidjass[/mention] with [mention]Saeed FJ[/mention] as 2nd lead and [mention]Booy[/mention] as a sweeper

We waited the 2 inter convoys to move and we hit the first dune without warming up ([mention]Rashidjass[/mention] style) that made all drivers will full concentration
The convoy moved smoothly all the way with couple of second tries, but all in all it was high level of fun enjoying the high dunes of the paradise city sweihan

I was in the convoy led by [mention]Solmaz[/mention]. It was my first inter drive since June, so I felt a bit rusty. But Solmaz gave us a jump start, no mercy, no warming up on fire!

I also experienced problems with the power of my car. I didn't have much problem with the air filter before, but I suspected it could be the cause - and when I opened the filter case, it was really full of sand. I cleaned it quickly but left quite some sand at the bottom, which was a mistake as it I learned soon - during the drive the sand went to fly all around and clogged the filter again. At the next stop [mention]Agalon[/mention] helped me to clean it properly, which some recommendations for future :). A good lesson for me to keep the filter clean after every inter drive. Sorry to the convoy I delayed.

Generally, it was a challenging but fun ride with many second tries, and Solmaz gave us some lessons again grin.

Thanks to her and Agalon for a fantastic morning!
Top
Post Reply
14 posts